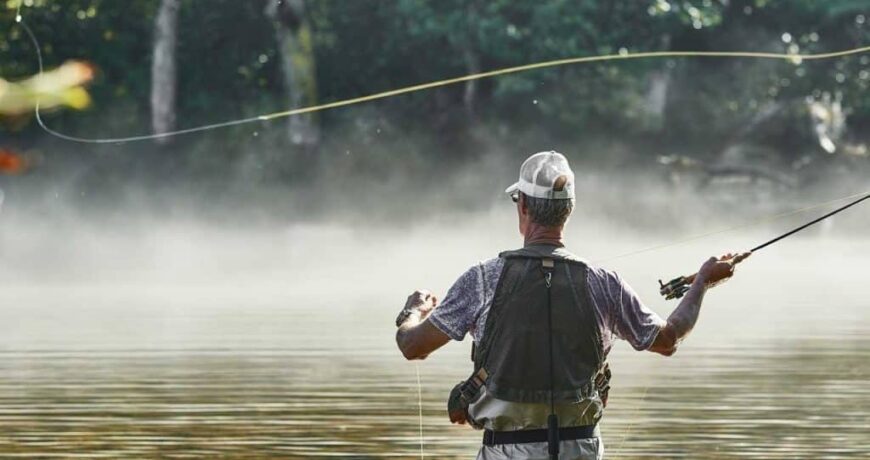 Fly fishing is an angling technique that uses an artificial “fly” to entice fish to bite. The techniques used to cast and present the weightless fly differ significantly from those used in other types of angling. You cannot cast a standard lure, such as a spinner or plug, with a fly rod and line, nor can you cast a weightless fly with a spin casting rod and reel. The fly line’s weight and taper are what allow the fisherman to cast and present the lightweight fly. Fly fishermen use flies that resemble aquatic insects, baitfish, and other prey sources. These flies are made by tying natural feathers to a hook and mimicking the natural subject of the fish’s attention. So, here today in this article I will tell you What is fly fishing?

Throughout recorded history, men have fished in order to feed themselves and their families. However, صيد السمك for food is not man’s only motivation. The desire to outwit the fish accounts for millions of people’s fascination with fishing. It also provides an escape from the trials we all face on a daily basis. Sports fishing is popular in almost every country around the world and is a popular pastime for millions of people. When man first started fishing, he used a Gorge instead of a hook (hooks came later). A Gorge was made of a sharpened piece of wood, bone, or stone on both ends. The first hooks were made from bone approximately 3000 years ago in the south.

They were simple in design but resembled modern-day hooks. The ancient Egyptian tomb paintings contain early references to fishing with a rod and line. The first flies were created after man, much to his surprise, discovered that covering the hook with feathers fooled the fish into taking it. These early fishermen simply floated the artificial fly

“The cool thing about Norway is how easy it is to go fishing. In many cities, you can even catch a fish right in the middle of town! That is very unusual in the European context “Tore Rydgren, Norway’s only university college fly fishing instructor, agrees.

He’s spent many hours by the river. He occasionally goes to the river bank just to observe it for a few hours, without even bringing his fishing rod.

“It’s all based on intense nature encounters. Fly fishing is unique in that the better you are at mimicking what the fish eats, the easier it is to catch it. The goal is to intellectually outwit the fish “With a chuckle, he says.

Fly fishing is arguably the most difficult and rewarding form of fishing, and it can take a long time and a lot of practice to ‘master.’ Having said that, in all my years of fishing, I’ve never met a fly angler who referred to themselves as a master of the craft. This is due to the fact that fly fishing necessitates a wide range of skills, including casting, fly tying, entomology (the study of insects), stealth, and stream craft (recognizing where the fish will be). There is always more to learn about fish behavior and the environmental factors that influence whether they bite or not.